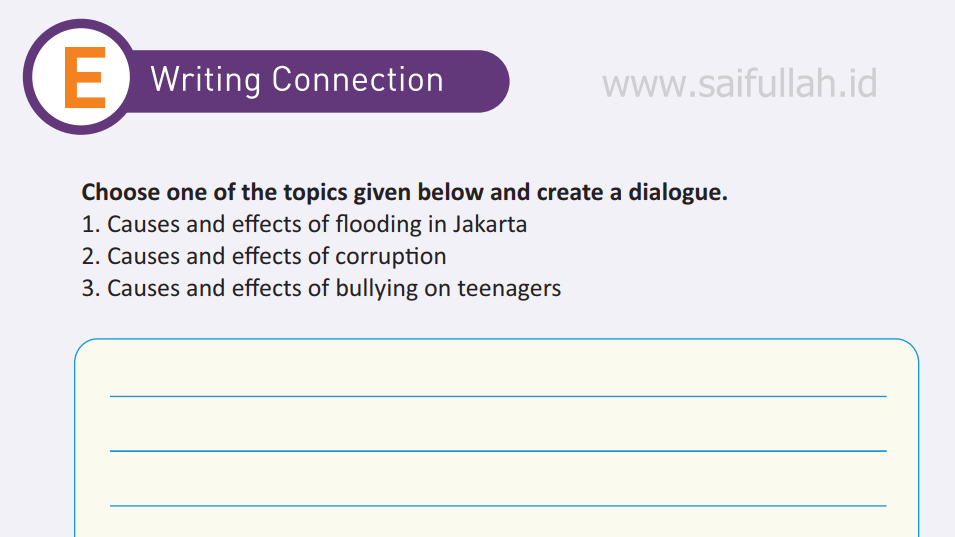 Choose one of the topics given below and create a dialogue.

1. Causes and effects of flooding in Jakarta

Baim: Have you read today's news?
Panji: Yes, I have. It's about the flood in Jakarta, isn't it?
Baim: Yes, it is. Floods have become a serious problem in Jakarta today.
Panji: The government should pay more attention to this issue. There are many negative impacts for those whose houses are flooded. For example, the destruction of homes and property, loss of property, illness, and even death.
Baim: I agree with you. However, flooding occurs due to human behavior. People often throw garbage in the wrong place, such as in rivers or sewers. It makes rivers and gutters full of garbage, so water overflows onto the streets when it rains and causes flooding.
Panji: That's not the only cause. Floods also happen because people cut down trees illegally. Therefore, there is no absorption of water by the trees. This causes rainwater to go directly into rivers or sewers.
Baim: So it means that the flood was our own doing. It was our fault.
Panji: You're right. We must work together to solve this problem.
Baim: I think so.

2. Causes and effects of corruption

A: What's in the newspaper today?
B: As usual, politicians were caught because of corruption scandals.
A: To be honest, I'm not surprised at all. Since the first day, our country was ruled by rotten people.
B: You are right, but our country is better at fighting corruption. The rotten people have been exposed one by one since the KPK was founded.
A: Yes, the KPK is commendable. I admit their work is really good. By the way, what do you think causes corrupt people to do their evil deeds?
B: Because of money, of course.
A: Their salaries are higher than most people in this country? I think they are overpaid.
B: Yes, their salaries are high, but we should not limit professional ethics to them. Nor should we forget their greed.
A: Oh, I see. people will never be satisfied with what they have. But greed can be restrained if they do not lack morality.
B: Yes. That's what I'm trying to say. Apart from greed, do you think there are other causes?
A: I think corruption can be caused by impracticality and unclear regulations. People pay bribes to define employee procedures. Corrupt officials see this as an opportunity for their gain.
B: Yes, that's why corruption occurs. Are people not aware that their evil deeds have bad consequences for the country and its inhabitants?
A: Of course not. They are selfish. They don't care that their crimes have an impact on the state budget. They don't care that the money they steal doesn't reach those who deserve it
B: That's right. Corruption can also bring down foreigners. You know, investment plays a role in the development of the country. So, if our country does not attract investors, we the people will also get a view.
A: Yes, when we look at the bad, corruption also causes service quality. You know, if the officials only do a good job when they talk, there's no way we're going to get the best service without bribing them.
B: I hate corrupt officials! They make officials. the good ones look like criminals too.
A: Right! Because of corrupt politicians, we also tend to lose faith and trust in the government.
B: Yes, harm only harms people in general.
A: That's why I want corruptors to be sentenced to death so that other people will not follow them.
B: The death penalty is too extreme, I think. punish them by humiliating them in public. You know, like having them stand in front of a crowd for hours every day wearing a vest that says, "I'm a Corrupt".
A: It's also a good punishment for them. Whatever the punishment, I want them to be severely punished.
B: Agreed!

3. Causes and effects of bullying on teenagers

Ricky: Hello, how are you?
Weny: Hi, I'm fine.How about you?
Ricky: I'm great. Where have you been?
Weny: I am from borrowing English books in the library.
Ricky: Have you heard what happened at our school?
Weny: Yes, I have. Someone bullied a teenager who was still a child.
Ricky: I think those who like to bully others because of less attention at home, or it could be that he is a victim of bullying.
Weny: Yes, I think so. The effects of bullies are dangerous.
Ricky: Yes, fellow teenagers should support and collaborate with each other.
Weny: I don't know, we just have to keep our friends from bullying other people, especially teenagers.
Ricky: Yes, I agree with that.